If you haven’t heard the news by now, you’ve been sleeping under a rock: Britain has voted to leave the European Union, provoking the shock, astonishment and ridicule of netizens and media pundits the world over. In 24 hours, Britain has left the European Union, has had their Prime Minister resign and has dropped the value of the Pound to its lowest level since 1985.

And yet, like all historic events, the internet is divided on what to say about this. You have the brilliant satirical reactions, such as those from The Beaverton, which point out that a nation that conquered the world (and helped enslave millions of people) was suddenly sick of being controlled by external power.

Or Twitter activists who expressed India’s astonishment that one need only to vote in order to get Britain to leave.

Other individuals tried to poke fun at something everyone is having a difficult time processing by lamenting the sudden loss of “culture” experienced by the UK as it leaves Europe (and its better food) behind.

Others – mainly in the social justice and humanitarian circles – rightfully mourned the means by which this decision was made, pointing out that not only had the elder generations made a major decision that would affect youth far longer than themselves, but also that it had been accomplished as a by-product of fear-mongering campaigns, that Britain has to “protect its borders” and keep out those nasty immigrants (who now form, you know, about 12 % of the UK population).

There is, however, two somewhat unexpected segments of the internet that seem to be celebrating this rupture for two very different reasons. There are those in the social justice circles with major socialist leanings that have said that while the means by which Britain has exited are unfortunate, the exit is still, as one amazing activist friend put it: “a black eye on the face of neo-liberalism”.

“Voting to leave the EU is a no-brainer for the Left. The European Union is remote, racist, imperialist, anti-worker and anti-democratic: It is run by, of, and for the super-rich and their corporations. A future outside austerity and other economic blunders rests on winning the struggle to exit the EU, removing us from its neoliberal politics and institutions. Corporate bureaucrats in Brussels working as agents of the big banks and transnationals’ now exert control over every aspect of our lives. Neoliberal policies and practices dominate the European Commission, European Parliament, European Central Bank, European Court of Justice and a compliant media legitimises the whole conquest. This has left the EU constitution as the only one in the world that enshrines neoliberal economics into its text. Therefore the EU is not—and never can be—either socialist or a democracy.”

Tell us how you really feel Enrico.

While it might seem to be a happy outcome to an ugly battle, the reality is that the means cannot justify the ends. The EU might be “racist and imperialist” to socialists, but quite frankly, it was largely racism, imperialism and misinformation that got the exit vote to begin with. Just because hyper-nationalism and attempts to “Make Britain Great Again” result in something that *might* (see: are unlikely to) benefit the socialist cause, does not mean it will – especially if we got there by xenophobia and intolerance.

Interestingly, this puts these guys in the same camp with unlikely bedfellows: far-right anti-government, anti-bureaucracy, anti-New-World-Order “truthers”. A cursory glance at some of the most virulent (and xenophobic) “freedom” websites shows the vote to be breaking, celebratory news because the Brits have thrown off the shackles of their oppressors! And, like I said, from a socialist perspective that’s great (that’s my inherent bias) but this was not a socialist revolution and the rhetoric which initiated a deluge of misinformed exit votes is more in line with the racist views of these people than anyone else. And let’s be clear, these are the same people who view the EU as the Rothschild-ian arm of a complex Jewish world conspiracy, or view Islam and “Shania” law as the greatest threat to Western civilization (who’s cave have your boots been under?), or won’t ever let the US congress take away their guns, or are in the habit of forming militias to keep the gov’t out of their “bizness”, no matter where they come from.

In the end, it’s alright to mourn the UK’s exit from the European Union without necessarily endorsing the EU because you might be mourning the fact that the exit happened on racist and intolerant grounds. It is not alright to celebrate #brexit without recognizing those deeply problematic premises which will, unfortunately, likely serve as the foundation of a newly independent Britain. 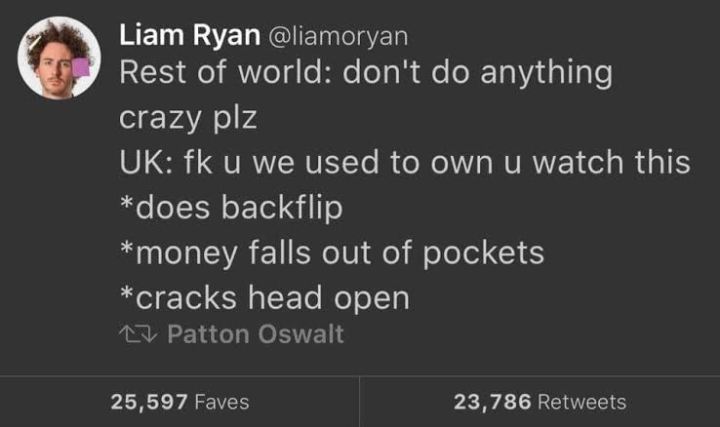