This past winter, Canadian MP Iqra Khalid put forth the now-infamous Motion 103 in the Canadian parliament – a 125 word document which recognizes the existence of Islamophobia and other discriminations, and categorically condemns them. Similar motions have passed in the past, including those condemning anti-Semitism and racism. What had previously been a straight-forward process turned into a ridiculous attack on both the motion and the MP with Khalid receiving tens of thousands of pieces of hate mail about the wording of the motion. While the motion thankfully passed, that hasn’t stopped the deluge of hateful rhetoric around the motion, nor its rippling social after-effects as people continue repeat the same intellectually-impoverished arguments about Islamophobia. So-called critics published op-eds in conservative tabloids and on social media platforms claiming the following:

Secondly, nothing about the motion was enforceable at all. Why can’t people understand anything about Canadian political processes? Was no one paying attention in Junior High School? Also, a similar motion passed unanimously in October 2016 that also used the word Islamophobia. Why is the short-term memory in this country completely non-existent? Does no one value even the most contemporary of histories? I have more faith in the historical narratives of goldfish at this point. I mean, really.

Thirdly, even if it was enforceable, we don’t actually have free speech in Canada – we have freedom of expression. Hate speech is not included in that so if someone’s idea of criticizing Islam is actually just Muslim bashing and spreading hatred and inciting people to violence: guess what? This isn’t America. That’s a punishable offence in Canada, thank God. The only people I ever see going on and on univocally about free speech are pseudo-neo-Nazis, real neo-Nazis or The New Atheists (not to be confused with regular atheists) who use that argument as a crutch for pushing their hateful agendas. Yes, we need to be free to express ourselves, and we need to protect that right especially in the press, but hate speech isn’t a part of that.

Sure, Islamophobia might not accurately convey anti-Muslim bigotry or racialized hatred endured by Muslims but that is a completely different discussion that these groups were simply not willing to have because they don’t actually care. By putting all of the micro-aggressions Muslims endure under the categories of only hatred and bigotry, it also undermines the actual fear that perpetrators feel about Muslims, most of which is stirred up by a global Islamophobia industry in which a hell of a lot of states and transnational entities are fully-invested. This is the modern crusading ethos in action, and there is money to be made by the manufactured social consent acquired when people are made to either hate or fear Muslims. It’s why  a lot of people no longer bat an eyelash when the MOAB is dropped on Afghanistan (yes, even if it “only” killed a few dozen people and militants) or #45 does missile strikes in Syria without seeking government approval. It’s why people even cheer this crap on.

Pretending Islamophobia doesn’t exist is what happens when people haven’t gotten out of their own privileged echo chambers to actually listen to the real, living, breathing human beings around them. They don’t even know how fully fabricated their worldview is by powers who seek only their own entrenchment and gain. They don’t recognize that even having to manufacture public consent for Islamophobia is indicative of how powerful that public could truly be if they only knew to rise up against the machine that harms all of us.  And, as a result, Muslims continue to be utterly dehumanized, marginalized and murdered in the process.

Should I tell you how I really feel? 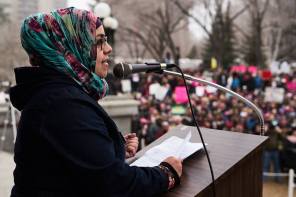 Nakita Valerio is an award-winning writer, academic, and community organizer based in Edmonton, Canada. She recently completed graduate studies and work as a research assistant in History and Islamic-Jewish Studies at the University of Alberta, as well as a research fellowship on Islamophobia and anti-Semitism for The Tessellate Institute. Nakita serves her community as the Vice President of External Affairs with Alberta Muslim Public Affairs Council (AMPAC), as an advisor for the Chester Ronning Center for the Study of Religion and Public Life,  and as a member of the Executive Fundraising Board for the YIWCL Cree Women’s Camp. Nakita is the co-founder of Bassma Primary School in El Attaouia, Morocco and is currently working on a graphic novel memoir weaving her experiences abroad with her community work and research.