The Drawing Board is pleased to announce that Nakita Valerio has been asked to deliver a keynote speech for the You Can’t Keep a Good Woman Down film festival on March 22nd, 2016. The speech will be delivered alongside veritable titans of women’s advocacy, Janis Irwin and Dr. Jodi Abbott. 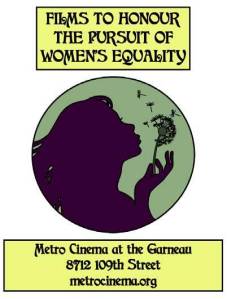 You Can’t Keep a Good Woman Down is a three-evening curated film festival and more produced in honour of International Women’s Day in partnership with the Metro Garneau Theatre. It is an endeavour to promote women in the same spirit as the mandate of International Women’s Day itself, here through art and activism. This festival highlights creativity, resilience and advocacy. Films are about the challenges women have faced in the march toward equality. There will be an artistic component leading up to the screening of each film in the foyer of the theatre.

Nakita’s speech will fit with the theme of the third evening of the film festival, which is “Make a Change in Your World” – focusing on education and gender equal rights.

It should be noted that Nakita will be representing the Alberta Muslim Public Affairs Council as the Director of Public Policy at this event, and a portion of the proceeds from that evening will support AMPAC’s women’s advocacy initiatives.

We highly recommend you support this incredible film festival and show your endorsement of what it stands for by purchasing your festival pass today.

Bio: Nakita Valerio is a prominent Edmonton activist and advocate for gender equality. She is currently pursuing graduate studies in History and Islamic-Jewish Studies at the University of Alberta.  Nakita was named one of the Alberta Council for Global Cooperation’s Top 30 under 30 for 2015, and is the recipient of the State of Kuwait, the Queen Elizabeth II and the Frank W Peers Awards for Graduate Studies. Most recently, she has been recognized by Rotary International with an Award for Excellence in Service to Humanity and has been named one of Edmonton’s “Difference Makers” for 2015 by the Edmonton Journal. Nakita is the owner of The Drawing Board, the co-founder of Bassma Primary School in El Attaouia, Morocco and a Director with the Alberta Muslim Public Affairs Council.