This article was written by Nakita Valerio, owner and head writer at The Drawing Board.

Trigger Warning: This article contains graphic information related to assault, rape and birth trauma that may be upsetting to some readers. Prepare yourself for what you are about to read, or abstain until you are able to continue.

Recently, there has been an online movement from survivors of birth trauma in which they are sharing their stories of disempowerment and assault at the hands of members of the medical establishment. These stories are extremely horrific and very graphic in their descriptions. Reading them leaves you with an unsettled feeling in your stomach and an aching heart as you empathize with their pain.

Clicking on these images will reveal highly graphic descriptions. Please be mindful.

I find these stories particularly relevant and powerful for me, as a survivor of birth trauma myself – and as someone who survives the effects of PTSD from that trauma daily. I am proud of these individuals, putting their stories up there for all to see, witness, read, digest… for everyone to stop for a moment and think about a continuing horrific phenomena which knows no global boundaries and has no face, is largely (if not completely) unreported and is all wrapped up in the politics of medical authority and the control over women’s bodies in particular.

There are few other times in an individual’s life which are more vulnerable than pregnancy and birthing. It is not an indicator of weakness to be vulnerable; rather, vulnerability is signified externally by the fact that their bodies go through enormous transformations during this period and the process of birthing happens in such a way that they are more likely to be marginalized in their voice, body and preferences than they would in regular circumstances. A birthing person may have their voice, preferences and body submitted to authorities who use their position to take over the natural process. I want to be clear when I say that in emergency instances, this is critical because intervention can mean the difference between the deaths of the mother and the baby or their lives.

However, such instances also offer the opportunity for serious abuses, particularly because the line between medical necessity and abuse of authority is highly ambiguous and can involve the collision of paradigms, worldviews and approaches to birthing that are highly incompatible. Without getting into that discussion because it tends to be too binary for me (either villainizing mothers or villainizing medical professionals), I want to talk about some of the terminology used in the campaigns for Birth Trauma survivors.

One such term that stands out is “Birth Rape” and it is often red-flagged as a term whose appropriate use is highly contested and may be considered inappropriate in birth-related contexts or others.  These issues can be found in discussion of (more) conventional rape as well and fit into general trends where victims are mistrusted despite the rarity of false allegations (dwarfed by the number of unreported assaults) and the paucity of cases that go to charges and then trial (not always resulting in a conviction). *Breathe* The testimony of women or queer individuals is often disproportionately disbelieved against that of their assaulters or rapists,  with some reserving “I believe you” status for specific demographics who may have been victims of rape.  This skepticism often takes the form of ethnic bias with white people being believed more than people of colour and even less belief being reserved for our indigenous brothers, sisters and two-spirited individuals.

There isn’t enough time in the world to go into the multiple historical narratives that are being enacted as tropes of rape culture in the criticisms of these skeptics and that is not my subject here today. I want to focus on why I accept the term “rape” to describe birth trauma arising from medical assault.

The main reason that I feel people reject this term is because they don’t understand the term rape. Rape does not mean “non-consensual sex.” Rape is a form of sexual assault which involves the penetration of various parts of one’s body against one’s will and without one’s consent. This penetration does not need to occur with an assailant’s genitals to constitute rape.  It can be carried out by violent force, coercion or abuse of authority. It is not “non-consensual sex”. It is not sex.

When stories are told about:

they are met with reactions that this isn’t rape or that rape is “too serious” an allegation to be related to birthing. I just shake my head. This lack of comprehension hinges on the idea that rape is still somehow about sex. And since birthing is supposedly not a sexual experience, then it can’t be called rape when things go awry, right? These people fail to realize that: non-consensual penetration is rape. There are only sex and birthing on one side, and rape on the other side. There is no in-between.

A contingent reason this is such an issue is because of the stigma attached to challenging medical authorities. The decision about medical necessity is placed entirely in the hands of doctors. And while this is not without some good reason (since they are highly specialized and trained professionals after all), the possibility (and often reality) of transferring total authority over one’s body to other people is deeply problematic. There are a myriad of factors that go into how a medical doctor treats a birthing woman including: personal history, personality, their own abused/abusive pasts, misogyny, ego complexes and much more. Doctors (like all scientists) are not impartial observers as narratives about them would have us believe. They are humans too and they must be humanized – for it is the dehumanized who will perpetuate actions that, in turn, dehumanize others. Doctors carry themselves with them everywhere they go and how they treat someone in such a position as birthing says a lot about their own ethos and attitude.

Do they want to just get the job done or are they willing to spend as long as it takes to ensure a healthy and just birth? Do they not care about the lasting formation of memories that are created for the woman (and her child) in these unique moments? Are they sensitive to the power that they wield and therefore approach such a position with due sensitivities and adequate communications?

Skeptics about birth rape also tend to question if such allegations can actually be brought to criminal charges. Ideally, this would be the case. However, with the current state of affairs, where victims of “typical” sexual assault are rarely believed and therefore rarely report, the added dimension of placing doctors above their patients in terms of authority makes the possibility for criminal proceedings unlikely. Unlikely doesn’t mean impossible. We have a long way to go and the first step towards this is in normalizing these important narratives, in listening to the people they happen to, in believing them first and foremost.

My best friend is an OB/GYN in Cairo. He told me that he had a patient once who came into her birthing experience with a plan and a support team. Internally, he was annoyed because he felt that she was stepping on the toes of his authority and that she might make things difficult for him if things went awry by making too many demands. This friend has an ethos of non-attachment and ego-slaying that I strive to emulate daily. He swallowed those thoughts and gave the woman the space to explain her desires and preferences in a calm manner, without having to make demands that might put someone else’s (ie. his) ego up in arms automatically. The entire time, he continued to check in with her about her plan, letting her know gently where things would have to be altered and changed, leaving her with her power: to digest and understand that these changes were necessary. In other words, he established trust.

This is what is lacking in birth rape. Trust is never formed in such cases. It is annihilated and this is the deepest trauma one can experience. It is the same trauma felt by survivors of rape, by survivors of sexual abuse, by survivors of any form of abuse. For what is being abused but one’s trust? One’s trust that their personhood and dignity will not be violated whether by violence, by penetration, by words or by all three. What is trust but a piece of love placed into the world, sometimes horribly violated? 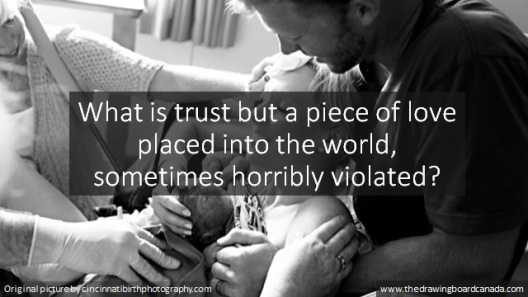 I applaud these individuals for sharing their stories and have been inspired to share my own story publicly as a result. In the end, this experience is just as authentic as anything else and by speaking out about what happened, we might connect the many, many others who have lived through it and are resilient survivors as well. There are a lot of us. May our strength light our paths to a more compassionate and safe future together, and may we strive to respond to the violation of our love placed in the world, the violation of our trust, with justice and more love.